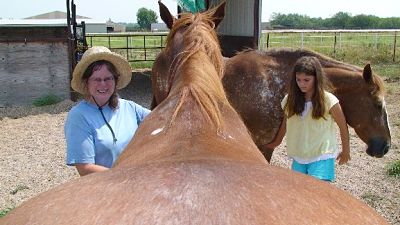 This horse has been an ongoing long-term project for me and I thought he would make an excellent equine massage case study.  He is a true testament to the idea of treating the “whole” horse and what can be accomplished through teamwork and a multi-discipline approach to equine health care.  He is a poster child for looking at horse conformation versus horse posture.  His current owners are an inspiration and have worked extremely hard to get this horse where he is today.  We don’t know much about what happened to Brego in his previous life other than he was a roping horse and had apparently been worked very hard during his career.

When I was first introduced to Brego, his body was locked on the left lead from years of being asked to move his body in the same way over and over again.  He could not take a right lead, either on his own out in the pasture or under saddle.  The large white spots behind his withers were a testament to his ill-fitting tack.  The left scapula was rotated forward, and his back looked like cottage cheese from all the fascial restrictions throughout the thick band of gluteal fascia.  He had many adhesions in his right jaw due to poor dentistry (or lack of) and having to chew on only once side of his mouth, along with many knots and severe hypertension through his neck.  His legs were crooked, his toes very long, and he didn’t have much range of motion in his hind end.  He also carried about 75% of his weight on the front end rather than the normal 60% of the average horse.

Needless to say, this horse had a lot going on and it wasn’t going to go away quickly.  It took years for him to get that way, and it would take the efforts of professionals from many different disciplines in equine health care to get him back on the right track.  Through natural equine dentistry, natural hoof trimming, and equine bodywork (chiropractic, acupuncture and massage), Brego is well on his way to a more balanced body and mind.

After only a few sessions early on in his massage therapy, we saw huge improvements.  He was even able to pick up a right lead in the round pen at liberty after our second massage session.

When looking at the conformation of any particular horse, it is very important to look critically at the underlying cause of imbalance.  In many cases, what we once thought was a conformation problem and could not be changed, is actually an effect of posture.  As for humans, soft tissue (muscles, tendons, and ligaments) are what hold the equine framework in place.  Unless there is an underlying deformity of the structure, it can usually be affected through bodywork (by bodywork I mean all things that would affect the body, i.e. trimming or shoeing, dentistry, chiropractic, etc. – not just massage) as evidenced by some of the photos below.

Note the slight toe in of the left front leg and slight toe out of the right front leg in the before picture (above left).  Even though his left foot is somewhat back and to the side from his body in this photo, even squared up, this was indicative of how he held his left front leg all the time, regardless of leg position.  The after picture (above right), taken nearly six months later, shows considerable improvement in both of this horse’s legs.

Note the extremely long toes of the front feet on this horse.  This is putting an increased strain on all the structures of the back of the forelegs and forearms (tendons, ligaments and muscles).  This hoof configuration causes the soft tissue on the front of the legs to shorten and the back of of the leg to lengthen, causing excessive strain to the back of the leg and making the structures more prone to injury.  This horse would exhibit good extension at the trot, but very poor flexion due to the shortening of muscles, tendons and ligaments on the front of the legs.  I’ll try and update later with a current side view of this horse’s front feet, which have shown much improvement.

Note the slightly cow-hocked rear legs of the before photo (above left), as compared with the more recent photo (above right) displaying a more upright, correct conformation.  Although not apparent in the above photos, Brego’s right hip/pelvis was tilted slightly higher on the right side.  After a combination of equine massage, acupuncture and chiropratic to his pelvis and hips, this has been completely corrected now.  Before these adjustments, Brego was unable to lift either back leg comfortably onto a hoof stand for trimming.  Now he has no problems with bringing either rear leg forward and up for trimming.

As mentioned above, Brego’s pelvis was slightly tilted.  You can just make out in the before photo (above left) the slight bend of the vertebra from the tailhead forward along the croup and can just make out the slightly higher hip on the right.  It is very subtle, but it was causing huge problems for him in being able to pick up the correct lead in back and get a nice smooth extended trot.  He is now learning to use his back end correctly again.  The owners have noticed a big difference in his ability to lift and round his back. I regret that I don’t have a before picture from this angle, as Brego’s habit of always carrying his body in a left lead position was very obvious from this angle.  His ribs were always bent outward on the left and his scapula was noticeably rotated forward on the left.  This recent photo shows both scapulas in the proper position and a straight spine.  He can now flex his ribs in either direction quite comfortably.

Brego still has issues that need to be addressed with his teeth.  Unfortunately with equine teeth, change comes slowly as they have a slow rate of growth and doing too much is just as bad, and often times worse, than not doing enough.  He continues to have issues with both vertical and lateral flexion as a result.  He continues to have dental work done by a natural equine dentist and we have high hopes that he will overcome these few remaining issues once his teeth are in proper balance again.  Brego now is able to pick up the right lead without cross-firing and is comfortably trotting under saddle.  Brego continues to show amazing improvement with each massage session and is like a completely different horse.

Brego’s latest adventures have him and his owner taking dressage lessons.  His issues with vertical and lateral flexion are almost gone, and the difference in this horse and his ability to collect himself are dramatic from where he started out.  He can pick up both leads, but still favors the left over the right.  He is an excellent testament to what equine bodywork can accomplish and no horse should be written off as broken and unfixable.