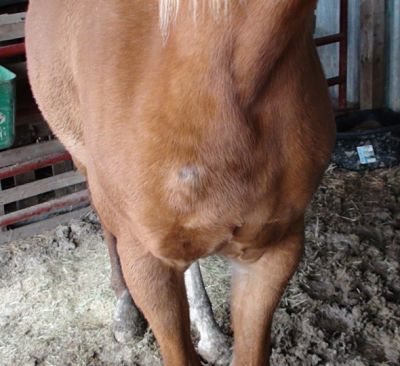 Several weeks ago I noticed that my 3-1/2 year old Arabian mare was moving very stiffly and appeared to be very sore.  At first glance it looked like her feet were sore or perhaps she had a stone bruise.  I checked her feet, found nothing, and just decided to keep an eye on her.  The stiffness persisted and got worse.  Thoughts of laminitis and founder started flitting through my head.  I checked her feet and legs again and could find nothing out of the ordinary.

Day 2  – By the end of the second day, she wouldn’t even come away from the hay bale to come up to the barn for her evening grain.  She had apparently been spending her entire day there.  This was very distressing, as she was typically one of the first horses to arrive at the barn for her end of the day scratch and feed.

I went to go and bring her in, and that’s when I noticed the very large swelling on her right pectoral muscle.  I had placed my hand on it while rubbing down her neck and shoulder in greeting.  It was extremely hot to the touch and hard as a rock.  My first thought was a snake bite, but that was highly unlikely and I could find no puncture wounds of any kind.

The next likely scenario was that Tex, one of our geldings, had kicked her.  He picked on her unmercifully and often and had been known to back her into a corner of the pole barn and kick at her.  It was in the right spot for a hard kick and the symptoms were in line with a trauma.  So I gave her some bute, performed hydrotherapy on it. The next morning I took her in to work with me at the vet clinic where I am a vet tech.

My regular horse vet looked at her and immediately thought it could be a possible case of Pigeon Fever (or Pigeon Breast as it is sometimes called). He had already seen an increased number of cases in our area.  But since her symptoms were also consistent with a traumatic injury, he wanted to just watch her for a few days to see if the swelling went down at all.

If it was trauma, she should progressively show improvement with hydrotherapy and bute over the next several days.  Since it was the day before Thanksgiving and I would be going out of town, I left her in his capable hands for the holiday.

Day 5  – I arrived home on Friday afternoon following Thanksgiving and spoke to my vet about my mare’s progress.  He indicated that the swelling had actually crept further up her neck and shoulder and was showing no signs of improvement at this point.  He did an ultrasound but did not find any pockets where an abscess was forming, which would be consistent with Pigeon Fever.

We were at a loss to explain what was happening to her at this point…kind of in limbo, waiting to see what would happen next.  He told me I could go ahead and take her home. We put her on a round of SMZ’s and bute and twice daily hydrotherapy just in case it was a cellulitis, and decided to watch and wait for how she reacted to the antibiotic.

Day 10 – After finishing the round of antibiotics with no improvement in her condition, but still no sign of a soft spot where an abscess may be rearing it’s ugly head, I was becoming increasingly frustrated.  My vet said to give it a few more days and we could re-ultrasound if there was still no change in her condition.

Day 13 – So this now brings us to the present.  When I went out to feed last night, I was running my hand over the swelling checking for a developing soft spot.  This time I found one…right in the middle of the swelling, a quarter-sized soft spot developing.  I immediately called the vet on call at the clinic and he agreed that it was most likely we were dealing with Pigeon Breast considering the time frame and symptoms were have been dealing with.

As this is a highly contagious bacterium, the recommendation is to isolate the infected horse and disinfect the area thoroughly where the infected horse is being treated.  I’ll be flushing the abscess, once it has erupted, twice daily as I would treat any abscess, and make sure to isolate and dispose of any drainage material so that my other horses cannot come in contact with it.

It is unsure how my mare contracted the bacterium since I very rarely take her off property.  However, since the harsh drought affecting Texas seems to have aided in the increase in cases, it is very possible that the bacterium was already here.

Do not get lulled into the false sense of security that your horses will not contract this if they do not leave their own property.  If any of your horses have similar symptoms, take all necessary precautions to isolate particularly if they have an open weeping abscess.  So far none of my other horses have shown any symptoms.

I hope this article helps someone else that may run across similar symptoms in one of their horses.    Being informed and prepared are our best defenses as horse owners in maintaining our horses’ health and well being.